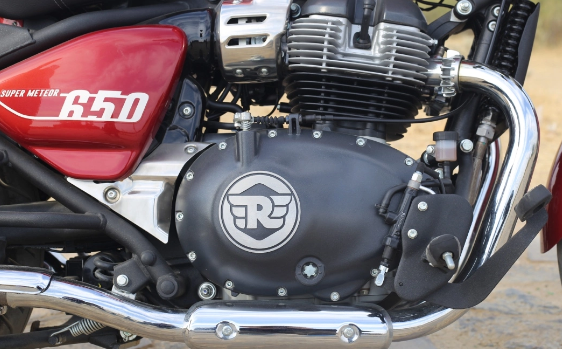 In terms of design, the new Royal Enfield Super Meteor 650 is a handsome cruiser. On the front, it gets an all-LED headlamp and chunky USD fork – both a first for any reissue. Some other design elements include a muscular fuel tank, twin exhaust pipes, ten-spoke alloy wheels, etc.

The Super Meteor 650 powers a 650cc parallel-twin, air, and oil-cooled fuel-injected engine that develops 46.3 bhp and 52.3 Nm of peak torque, paired with a 6-speed manual gearbox. The same motor performs its duties in the Interceptor 650 and Continental GT 650.

Talking about the cycle part, the Super Meteor 650 gets a 43 mm USD front fork and a mono-shock absorber on the back. For braking duty, the motorcycle sports disc brakes and dual-channel ABS at both ends as standard. Regarding features, it gets a twin-pod instrument cluster with re's new Tripper navigation system.

The new 2023 Royal Enfield Super Meteor 650 is offered in three variants with prices ranging from Rs 3.49 lakh to Rs 3.79 lakh, ex-showroom. Super Meteor 650 has no direct rivals in India. However, indirectly it will lead to Benelli 502c, Kawasaki Vulcan S, etc.
tech